Yesterday, the ViBella ladies and I had a great party!

I didn’t know what to expect going into the day, but I knew I was going to have fun. 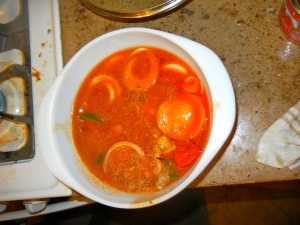 We spent 4 hours preparing and cooking the food. Everything Haitian was made and it was quite the feast. I learned how to make my favorite “red sauce”, which is served over rice, plantains and chicken.

I learned that Haitians fry practically all of their food. They fried the chicken, the plantains, and some type of breading (I forgot what it is called in Creole).

They filled the two tables in my house and decorated the food like we were going to be presenting it to the president.

Pastor Patrice came and prayed for the work and for all of us.

I told them how proud I was of them, how I had often had days at school when I would think of them and wish I could have been here. I told them I was excited for the future of ViBella and I encouraged them to keep working hard.

Vivian said she was thankful to God for the job because she can share with her family and friends more.

Yolande said she was thankful to God for the job because she was able to put her child in school and not have to worry about how she was going to pay for it.

Leszneska and Joanna both said they were thankful to God for the job because they could provide better for their young girls.

Judeline said she was thankful to God for the job because she could help her family and she knows she will be able to provide for her baby. She is expecting and is due in October.

It was a day full of thanksgiving, laughter and lots of food!

Cheers to 1 year of making life more beautiful for Haitians. 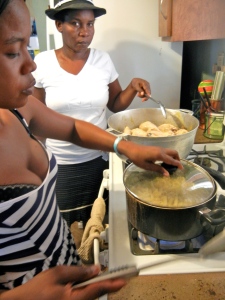