Time is such a weird concept. Six months have flown by since I’ve last written a post. I’ve had so many things to write, yet time always gets away from me. Or maybe it’s me letting time get away.

I remember embracing the month of June with much excitement. In the month of June, I felt super accomplished. Super bad ass. Just super on top of things. In the first six months of 2018, we had built – from the ground up, every square inch – Rosie’s expansion. My dad, mom, Paige and I were basically superheroes during that project. Not to mention the two teams from Iowa who came down to help with the roof. Literally, there was no stopping us. There was a two week span where I actually believed I would just be painting for the rest of my life. We just painted, non-stop, for days on end. Superheroes.

We opened the doors on March 7th and it was a complete whirlwind from then on out. We had record breaking sales the month of June and I just felt…good. I truly am living out my dreams when I’m in that space.

The Lord worked in so many other ways those first few months. I had revamped and completely re-started the Starfish Program. I felt really confidant in all the decisions I had made for the future of the program. I felt good about it.

Our greeting cards ministry through Rosie’s continued to grow. Holiday orders were coming in, I was training more mamas and seeing the impact of those jobs be truly transformational in these women’s lives. Everything about that work and those relationships felt good.

(Side note, I studied graphic design in college. In my very first graphic design class as a sophomore I was asked what my dream job would be and my answer then was to design greeting cards. I’ve just always loved a well-designed greeting card + I believe in the power of a word of encouragement. Fast forward to 2018, I now design all of the greeting cards our mamas make + I do it with an amazing tribe of women both in Iowa and in Haiti. That’s how cool God is; He never forgets our heart’s desires. Greeting cards and all.)

Another exciting thing that happened in those first six months was God opening up doors for us to partner with Beljoy jewelry. The founder of Beljoy came to visit in March and everything just felt good. I’ll be honest, I went into the meetings with walls up, but the Lord tore them right down and allowed me to be transparent, comfortable and peaceful as we made decisions to partner together. Five women started working for Beljoy in Rosie’s kitchen in May and it has felt like the perfect answered prayer from all my pleas for God to just give opportunities to Starfish mamas. Jobs, as it turns out, are the answer to…well, everything.

I couldn’t be more excited about this partnership. You wouldn’t even believe the personal full story of redemption if I told you…but, that’s for another blog. Anyways, it just feels good. The artisans are now working in a great space in Simonette.

So, in June I wanted to write a blog post. Talk about how good the first six months of the year had been. How on fire our business was. How on fire my spirit was. But, then, they actually just lit Haiti on fire for an entire week-end and things kind of just fell apart, both in Haiti and in my spirit.

The world cup was happening at the time and Haiti’s favorite team is Brazil. It was a Friday afternoon and Brazil wound up losing their game as the Prime Minister made announcements that the price of gas would be raised significantly over night. There’s a whole back story to this mess, just google “Petro Karibe Haiti” to learn more. But, essentially the country just lost it. Entire businesses were set on fire and looted. Every corner had burning tires and road blocks. We had a team of 16 people visiting and we barely got them to the airport Monday morning.

It was complete drama and chaos.

My family would fly out of Haiti on Tuesday (this was always our planned itinerary) and because I’m naturally a mess, I spent Monday throwing up and on an IV. No better way to pack your family of six and prepare to leave the country than spending the day in bed sick. So much sarcasm there, guys.

Anyways, we made it out in one piece. We spent five glorious weeks in America, doing all the American things. We had precious time with my brand new nephew, made memories with cousins on the lake, had sleepovers with friends & ate so much food. It was beyond good.

We came back to Haiti mid-August and that’s when things went from good…to well, epically bad. I just fell apart on the inside. Business was bad because when a country decides to light itself on fire, people will in fact stop going there. It took a two full months before things felt “back to normal”. August is also “back to school” time, which means everyone – and I mean every one – needs money and help. I worked really hard those first three weeks back prepping all of the Starfish kids to go back to school – all 113 of them. I also had hundreds of hours of work to do on my computer to make all of our updated sponsorship cards for Touch of Hope. And my lab-top decided to have a meltdown in the midst of all that, too. I felt super overwhelmed, super alone and super not good.

My high in June was so far gone and I didn’t know what to do. I remember crying to Webert one night and just saying, “I hate that I hate Haiti. You’re not suppose to hate the place you live like this. I just hate it.” And, I felt trapped. I felt like I was drowning. I questioned everything. I even had a meltdown about pistachios.

I went back to America a month later with Rubie, because God is also gracious and I had enough free miles for a free trip. I healed and pulled it back together quite a bit on that trip, but here’s the thing…

The year is almost finished and the burdens of the unmet needs still feel unbearable. I turned 29-years-old this month and I’ve lived most of my days this year totally on fire. I’ve built what seems to be my dream business, I’ve watched the ministries I run grow into things far bigger than what I could have ever imagined and yet, I feel like I’m a day away from quitting most days. It’s just hard.

It’s hard to always be good.

It’s hard to be wise. It’s hard to know when to ask and when to just let the Lord show up. It’s hard not to get angry. It’s hard not to think about the mom who also just lost her three-year-old this past weekend because she had no emergency room to take her to in the middle of the night. By the time dawn came, it was just too late.

Yet, I have to believe that God’s still doing a good work in me, even if I don’t see it yet. He’s also just always refining me. And to be refined, we have to work through all the hard stuff. And maybe, for right now, that’s why I’m not good. Because, I’m working through the hard stuff. I’m asking the hard questions. I’m doubting the good. I’m questioning the systems and believing there’s got to be a better way. But just wondering, how do we find it? I’m feeling all the feels and I’m crying when I need to cry (which is a lot!)

So, here we are, at the end of the blog and I don’t know how to pull it together necessarily. So, I’m just going to end with some unspoken needs:

1.) I have two super sweet girls whose mom’s are in Starfish this year. They both have CP and both mom’s are constantly requesting XL diapers. Would anyone out there like to sponsor either girl for $20/month so their moms can buy diapers? I’ll send you super sweet pictures of them.

2.) I have a pile of 15 papers that I’ve been praying over for months now. Each paper is from a mama who is need of housing for her and her children. I have funding for 8 homes, would anyone out there like to raise $4,000 to build a home for a family in need? I need seven more!

3.) I have a new stack of sponsorship cards printed. Each child needs a sponsor. In order to keep our school open and running, we need 50 more sponsors to cover our monthly budget. So, who’s into investing in a child’s education? You’ll play a major role in the future of Haiti’s next generation, pretty powerful stuff, if I don’t say so myself.

4.) I have 18 mamas working full-time on our greeting cards. They’re the best. But, I have a vision to see this number double by 2019. It’s simple, all you have to do is buy more of our cards. We have a great wholesale rate, so send your friends with boutiques or businesses our way. Also, for the churches, our greeting cards are a great avenue to do ministry. Let’s become churches who encourage; use our greeting cards + employ mamas. It’s one of the most beautiful things and is making the biggest impact here!

5.) Lastly, I have a hunch a bunch of you are playing the lottery, so if any of you by chance happen to win the 2 billion dollars, just remember me. All I want is 1 million dollars. So simple. 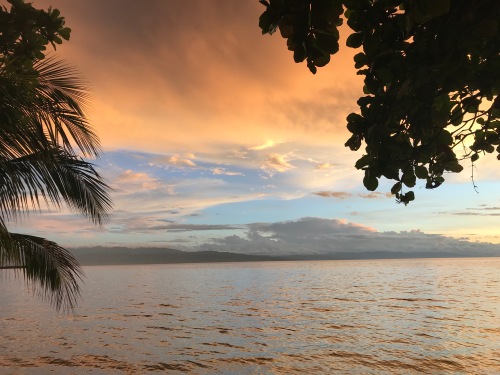 And, if you made it this far. Thanks for that. This was a long post. Here’s a beautiful picture I snapped the other night on my porch. I hope you’ll have the chance to watch a sunset on my porch, drink a cold beer and talk all the hard things with me some day. I think together, we can make this world a little bit more wonderful. It’s a slow kingdom coming, but it sure is a beautiful coming.