just another..well, not so normal day

I knew it was going to be an eventful day when it was sprinkling as I drove to work. Usually the rain doesn’t come until the afternoon, after making its way over the mountains. When I arrived to work, I had over 300 ViBella ornaments to check and re-check for mistakes. When I only found 3, I praised the ladies for a job well-done.

Aside from ViBella keeping me busy, this past week we have started yet another new and exciting project. I had two friends from home visit this past week. A mom and a daughter. To raise money, Kendra, a 10-year-old, made over 450 pens decorated in duct tape. Half-way through their visit, we realized we had a business opportunity right under our nose. So, this past Tuesday, Kendra and Joni taught 13 teenage girls in Simonette how to make duct tape pens. Today we finished all the supplies that we currently have, so among all of the ViBella business, I spent time correcting and directing, laughing and smiling with girls who are so excited about their new job. (More to come on this project in a few weeks after we get it running and more supplies come….stay tuned 🙂 ) 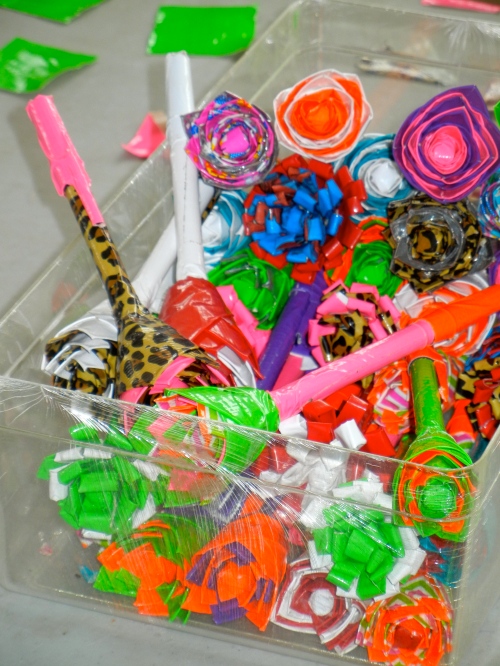 Around 11:00 I headed to the school to find Webert. I needed to go to market to get money exchanged because tomorrow is pay day at ViBella. At the school, I found Webert talking to a gorgeous teenage girl. She had come to sign up for a new school year and I quickly realized her deformed hand and arm. Webert asked her what had happened and her answer was that her dad is a “voodoo master.” She explained that she didn’t want to serve the same demons her dad was serving and that she believed in Jesus. Through torture and voodoo ceremonies she was burnt and now her deformed hand shows proof of the evil. Even after all the trauma, something I don’t think I could ever live through, I saw hope in her eyes as she proclaimed her love for Jesus and confessed herself as a Christian. She told Webert she loves school, so what were we to do? Our school has officially admitted over 400 students for next fall (100 more than we expected) and we are trying not to admit anymore, but how could we deny a girl with a story like that?

After finishing her paper work, we headed to Cabaret on the motorcycle. When we got off the motorcycle and made our way into market, Webert received a phone call.

Rewind: In the past 3 days, Magdela’s father has come and taken her away from Tytoo. Frank (who runs Tytoo) and Webert spent all day Tuesday at the court trying to gain custody. The judge ended up giving the father the ultimate decision and he took Magdela. Mereny, the 12-year-old was able to make her own decision and decided to return back to Tytoo, was very upset that night. We have all been diligently praying for Magdela to be reunited with Mereny and the Tytoo family.

It took 2 days and her father called Webert today as we were in market. He said he wanted to give her back. Webert and I were literally skipping down the street in joy as we quickly ran to the shelter to see Magdela and the dad. He gave his reasons why and said he would give her, but Mereny needed to be with to take her. So, Webert and I did our shopping, exchanged the money and quickly headed home to give all the good news to my parents and Esther and Frank in Tytoo.

As I walked up to my house, from the side window was Sonia, the oldest of the girls from the Noel family (Marantha’s older sister). All four of the girls were here and my mom was showering and putting them in pretty new dresses. They ran around the corner all excited to see me and I asked “what is going on?!” Turns out momma Noel is having trouble breathing, sleeping at night (I don’t blame her since she sleeps on the dirt floor) and the baby has dropped. We expect the baby to come any day! We admitted the whole family, momma with her 6 kids, into Tytoo this afternoon so that we can have 24 hour watch over the mom. 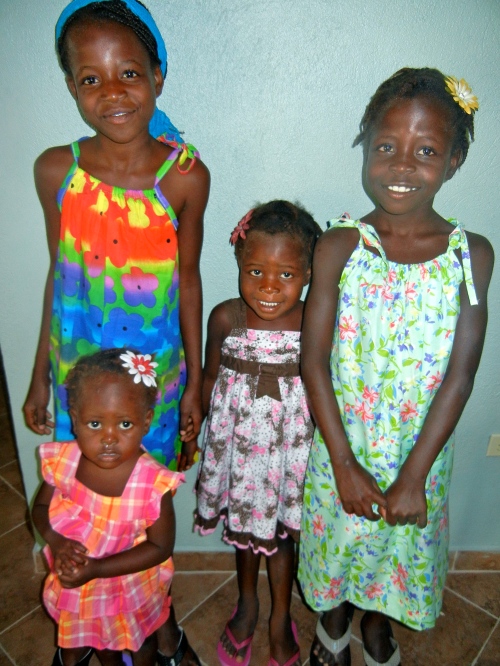 As we dropped the four girls off, all shiny and clean with their new dresses on, I gave Esther and Frank the good news: Magdela can come back home!

Esther and Frank rejoiced in tears and all we could do was thank our heavenly father. This whole time we have just been praying for His will to be done and we are witnessing it. My mom, Webert, Mereny Lovenson (he of course had to come along) and I headed to Caberat to get Magdela. We had two witnesses sign the custody papers saying the father can come and visit Magdela whenever he wishes, but cannot take her out of Tytoo again. Praise the Lord!

Afterwards, I said goodnight to the Noel family and told them I would be back tomorrow. I told the momma I will right beside her, holding her hand, whenever that baby decides to come. I will be the first to admit I don’t think I will be able to handle watching the birth, but I would have to say I love this momma. Every time I see her, there is no shortage of hugs and kisses. We have laughed and cried together and she doesn’t even know that I have money to build her a house yet! (By the way, the Lord provided and so many people were faithful in their giving to this family. We are in the process of hiring the boss and choosing the final location and hope to have construction under way in the next month. Future blogs to come! I would like to call it Extreme Home Makeover: Haiti Edition. Stay tuned!)

Jeffte and I headed home on the four-wheeler and Jeffte decided to leave the gate open, so the excitement wasn’t over until I chased my donkey down the road and literally carried him back into the yard because his halter had somehow fallen off!

My amazing boyfriend cooked chicken, rice and my favorite red sauce for supper and now I’m enjoying the sound of the ocean as I type away.

My days are usually nothing short of boring. But, somedays I feel like I’m just going through the motions. Other days though, like today, I feel so used. I’m worn out, tired, dirty and I have awful BO (yes, I thought that detail was necessary for all of you to know!) but there is no other way I want to feel at the end of the day.

As disciples of Christ isn’t that how we should all feel? Completely emptied, tired and used.

“He gives strength to the weary and increases the power of the weak.

Even youths grow tired and weary,

and young men stumble and fall;

but those who hope in the Lord will renew their strength.

they will run and not grow weary,

they will walk and not be faint.”

One Comment to “just another..well, not so normal day”