There’s a place in this world that makes me sad. It’s a place I have wanted to write about but haven’t been able to find the right words or the right way to tell its story. Today I’m going to try to piece it together, because I feel like it has been on my heart for far too long.

I found myself driving along the one sound piece of infrastructure in Haiti to its capital, Port-au-Prince, this past Tuesday morning. The sun was rising over the mountaintop and the ocean was to the right of me reflecting the morning’s newly born rays. A whole new day lied out ahead of me. As I cruised along, I watched as the hillsides of Haiti woke up.

From afar you can only be captivated by the majesty of Haiti itself. The mountains and the ocean, knowing these were the grandeur things that have been here since the beginning of time. But as you look more closely, you see the sadness. You will begin to notice the not-so-grandeur and majestic things. You will notice the brokenness.  And you will see a mountainside that thousands call home. We (I’m stereotyping we into those of us who live within a four-walled structure that keeps us comfortable and safe and those of us who are beyond ruined by our North American society. I’m putting us into a group of people who are so blind that we continue to ignore and oppress the mountainside I’m going to introduce you to.) would consider this mountainside and these “homes” unlivable, infeasible, unbearable, refutable and out of the question for human survival. Quite frankly, I don’t think we would be able to survive on this mountainside.

It’s a mountainside I drive past regularly, a route that government officials, people of wealth, missionaries of all denominations and Haitian citizens drive past everyday. It’s a mountainside that stretches for as far as the eye can see, definitely not something that can just be “over looked.” It stretches along the outer skirts of Port-au-Prince and has now been consumed by the homeless. Not the kind of homeless we know of in the United States, but a whole different kind. These are the people whose houses fell, crushed and diminished three years ago when the country of Haiti shook to its core. With no other place to turn, thousands of human beings had to look outwards. They looked to the out skirts of the city, to the mountainside. They first moved to this place as a temporary dwelling, but it has now turned into a permanent reality.

I reckon we would consider these people “homeless,” due to their conditions. Or as a girl who grew up camping during the summer months, maybe it could be seen as a permanent style of camping, except to the tenth degree because there sure aren’t any fun beach days or nighttime campfires with s’mores.. This lifestyle is about survival. It’s about having nowhere to call home, nothing to claim as your own and doing what you can to survive to the next day. There is no such thing as an overdue stay or no place to turn to when the “camping trip” is over. This is reality. It’s all too real.

It’s a mountainside that rids me with guilt each and every time I cruise on past.  At first it was the thoughts of “well this is just the result of the earthquake, it will soon pass,” but now it has grown into something so much more than that. Something permanent. Something real. Something that is definitely not going away…

This mountainside tells the story of the thousands who lost their homes, their family members, their friends, their jobs, their lively hoods, and their voices. This mountainside is crying for someone to hear them, yet people – thousands of people – just continue to cruise on by.

People cruise on by to their homes made of cement or down the road to the fancy beach resorts that have buffets overflowing with scrumptious food. Many people will cruise on by and return home to the land of wealth and prosperity, a place we call home and a place they call “Etazini” (America). A place where we don’t just have homes made of a sound structure, but we have running water, cupboards overflowing with food, indoor plumbing, carpeted floors, expensive leather lay-z-boys and televisions with thousands of channels. We even have electricity that powers our obnoxious amount of iPods, cell phones, lab tops, desk tops, tablets, video games, refrigerators, microwaves, clocks and electric blankets. The list can go on forever. This place I’m talking about doesn’t have any of these items.

And as I make my personal journey, cruising past this mountainside, I watch as their day begins so differently from those of my loved ones back home. I think of some of my friends who are going off to class at a big university or my dad who is waking up from his king-size pediatric bed and enjoying a cup of warm coffee. I think of people who head to an early morning work out at a fancy gym or those walking into their multi-million dollar business wearing suits that cost more than some of these people shacks and the possessions inside. I think of the millions of people who will start their day by driving through a Starbucks drive-thru and the rest of us who will take our warm shower and sink to brush our teeth in for granted. I think of myself who had a hard time deciding what outfit to wear and totally took for granted the bowl of cheerios I had eaten before I headed out for the day.

But don’t you see, none of these people…none…of them will start their days like that.

No warm showers. No king-size beds. No closets overflowing with clothes. And especially no Starbucks coffee.

They will rise off the dirt floor or ragged sheet in their not-so-called homes (I’m sorry, but I don’t consider a construction of tarp, tin and scraps a home). They will begin their journey to fetch their day’s worth of water or pack their possessions to go sell at market. They will have to face the fact that another day of hurting and surviving is before them. Another day of heat, sweat, hunger, pain, illness, and all the unknown feelings of hurting, loneliness and grieving will have to be faced.

So, we read about their statistics. We hear how they are living. We have all heard about the “poor” and the “third-world countries”. And we have all said “I’m so thankful and feel so blessed,” but I’m officially fed up with that. Where is the guilt? The passion? Do you not feel absolutely sick to your stomach knowing that hundreds of children will go to sleep on this mountainside hungry and afraid. Can you imagine how many hidden stories of rape, abuse and assault are hidden in that mountainside? Then there are the mothers of these children. Having to face the dusk of another day tucking their kids into their not-so-real beds, because let’s be honest, none of us would be okay letting our own children sleep on the dirt earth floor. Can you imagine the rainy nights? The cries of the babies? I can’t. But it’s real, oh so real.

And we..what do we do? We just keep on cruising by.

The problem with this is that I’m so ashamed to say that I don’t even know a person that resides on that mountainside. I can’t even tell a personal story, but I know that this mountainside is a very real place in this world. It’s a very real and sad place. And it’s a place that I wish didn’t exist. It makes me so sad. It makes me feel guilty for the comfy bed that I will lie my head on tonight or the piece of chocolate I just enjoyed.

It’s a place full of people just like you and me. And it is people like us (the ones with the money, the power, the technology, the big ideas, the ones who are “changing the world”) who are allowing the people on that mountainside (the ones who had the unfortunate chance of having their homes and dreams crumble in an uncontrollable event) to continue living in such conditions.

I wish someone would come up with the answers, because I sure don’t have them.

What a sad place in a big and sad world. 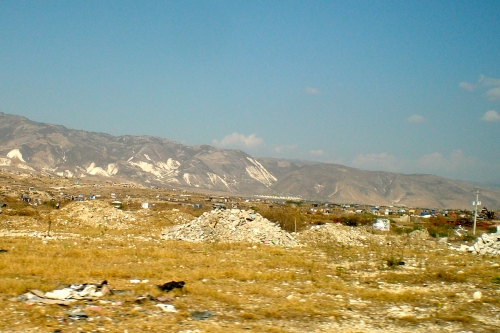 A glimpse at the mountainside, something a picture can’t really capture.

7 Comments to “cruising on by”