Five short years ago the country of Haiti was shaken to its core. An earthquake struck the country’s capital in the late afternoon, about an hour before dusk. Buildings crumbled, homes and businesses fell, and bodies were trapped in the rubble as the sun set that January day.

The country of Haiti would be forever be changed as the world’s eyes turned its focus to the small Caribbean island which is home to around 9 million people.

I had made my first trip to Haiti that summer before, but by Christmas 2009 my parents were taking the leap and purchasing our second family home on this little island. Three weeks before the earthquake, my parents had visited and rescued a small, dying boy from an orphanage. His name is Matthew. He stole my heart the second I saw the first picture of him. 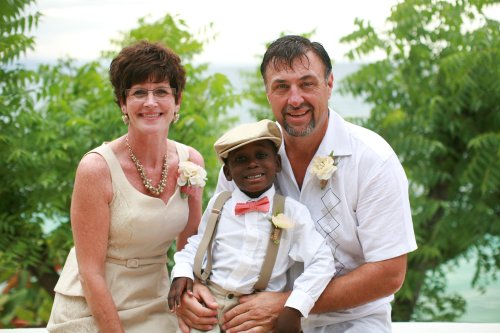 Matthew and my parents at my wedding nearly one year ago. When Matthew was rescued, the doctors estimated he was within 48 hours of dying. God’s timing was perfect and Matthew reminds me that miracles still DO happen.

My mom was suppose to return to Haiti the day before the earthquake but was instead fighting for her life as Hepatitis A was attacking her liver. My mom had contracted HepA while in Haiti. In a huge snowstorm, mom was flown to Rochester, Minnesota where specialists put her on a waiting list to have a liver transplant. By the grace of God, a miraculous healing happened in that body of hers and my family began breathing again.

I returned to college to start the spring semester of my sophomore year. A week later, I was babysitting and watched the news while sitting on their living room floor on that January afternoon as the world was informed of the earthquake. All I could think of was how God knew how stubborn my mom was, so He had to make her deathly sick to stop her from being there during the earthquake. But, I was also worried about Matthew and all of our new Haitian friends.

We would later get word that everyone at the mission was okay, but the amount of damage would forever change the country.

I would move to Haiti fulltime two and a half years after that January afternoon. I would meet so many people who were still living in makeshift tents and tarps, because they had lost their homes in the earthquake. 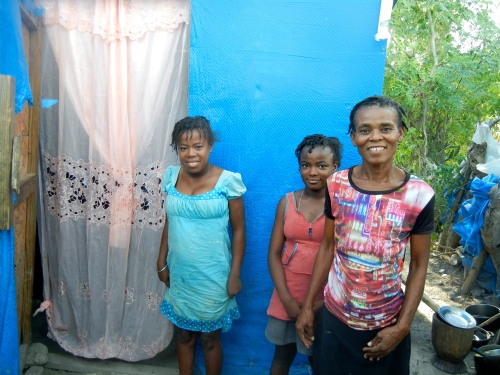 Sonia, on the right, is a full time cook at the school and we hope to build a new home for her and her beautiful daughters. 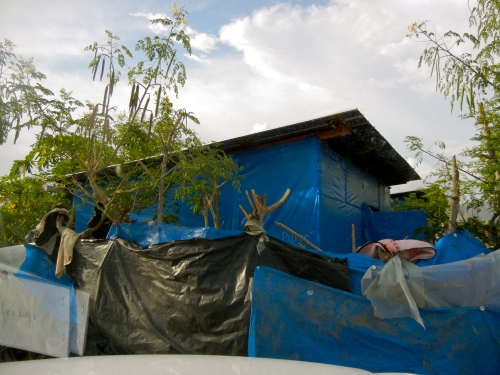 The five-year anniversary date is coming and those people I met at the beginning have become like family to me. Some work at the school, some go to church with me, some are students at the school. They’re my neighbors. We hug and care for each other.

It has been five years since that January afternoon and they are still living in tents and tarps. Everyday in these “temporary” structures is a reminder of that day which shook their nation to the core. The day when hundreds of thousands of lives were lost and thousands more left homeless. The day that allowed cholera to sneak in and kill many more innocent lives. As shockwaves followed, the side effects this earthquake caused were monumental. I don’t think we will ever be able to grasp the effects mother nature caused on that afternoon in January five years ago.

Yesterday, I stood in downtown Port-au-Prince as I shopped for Christmas gifts. The streets are filled with vendors, covered by tarps to keep them hidden from the sun. The paths are narrow as people push their way through. I took a moment to take in the scene, trying to grasp the reality of this market. Above me were broken buildings, remains from the earthquake. I tried to imagine for a second what that place must have been like on that January afternoon, I simply cannot fathom it. Piles of garbage fill the street corners, a stream of black water runs alongside the curb, and beside and above the filth sit the vendors. So many people trying to make a living on top of the rubble and garbage.

As I sat in the truck, eating an orange, waiting for Webert to finish paying for the Bibles, I watched a teenage boy wash his clothes in a small blue bowl. Next to him, a little girl, no more than 8-years-old, filled two water jugs and walked away. Behind the water hole, was a man who washed a rug by hand, he more than likely makes his living by washing rugs for people. The teenage boy finished his laundry and set it on top of a garbage pile for the clothes to dry. Another man passed by me and asked me for money to go to the doctor. The background of this scene, rubble and broken buildings. The only question I could ask myself: How will they ever be able to rise above the rubble if they continue living below and amongst it? There surely was no glimpse of hope in that scenery.

After yesterday, I have such an even stronger to shine some light in the darkness. I call it the “blue tent city of Minoterie” and when I walk the paths I feel as if I have glimpsed hell on earth. As I remember the fifth year anniversary I want to bring redemption to some of these families. Give them a place where they won’t have to wake up and remember the day their lives crumbled. Build a home that represents hope and a future, not a past of lost.

Today I am writing to you all because I want to build five homes…one for each year. Five homes for five families who are now my friends and will forever be my family in Christ. And, I have come to believe that if we truly want to be the hands and feet of Jesus it requires a lot of actions. Surely, I could walk these paths and pray over these neighbors, but talk is only so much. I have the resources to tell the world about these people. It’s happening right now as you read this. Social media will allow me to share, retweet, copy and paste and post this baby all over the world wide web. These words and stories will creep onto your computer screens and will hopefully shed light on the conditions the poor are living in and call you to make a difference. Making a difference requires change and the change I want to make is providing sound structures for FIVE families, which will allow them to finally rise above the rubble.

Will you join me? Will you help me bring heaven to earth in a place where hell has been for far too long?

Each house is going to be approximately $3,000. A single block for each house is around $1 US. So, even if you can only make a donation for one single block, know that it will matter.

You all probably know this already, but I am a dreamer and I am dreaming up a better tomorrow for these dear loved ones of mine. After five years of living in wreckage, let’s make a way for heaven to make its way on earth. Let’s show them how the future is full of hope.

Sabrina and I. Sabrina is in fourth grade at our school and has been living in a blue tent since 2010. Her family will be one of the families to receive a new home.

What do ya say?

My friends Jennifer Lee and her daughter Lydia Lee are also helping me with this cause. They visited Haiti over the Thanksgiving week and walked these same dirt paths with me. Lydia sponsors a boy who lives in one of these tents and Jennifer laughed with and loved on the cooks who also live here. They will be sharing their experiences over at their blogs, so please check it out: jenniferdukeslee.com and lydiamlee.wordpress.com

Please forward, share or retweet as we begin to raise the funds for five beautiful new homes!

{We have several options for you to donate through}

We have also set up a fund through PureCharity for this event, click here and be a click away from donating to this cause.